skip to main | skip to sidebar

CELEBRATING THE ART OF LIVING WELL,
AS THE FRENCH DO,
BY USING ALL FIVE SENSES
TO APPRECIATE EVERYTHING ABOUT LIFE
(FOR MY JOIE DE VIVRE PHILOSOPHY, READ MY FIRST THREE POSTS FROM JUNE 2009)

I don't know about you, but I am one who always gets a little bit depressed over the end of summer. It goes back to my childhood, when every Labor Day meant the end of our glorious summer vacation on Cape Cod, and a return to school (even though I liked school) and Minnesota (even though I liked those winters, too). Then after I had kids of my own, the fall always meant the end of my time with them over the summer months. Yes, I was one of those moms who mourned the start of school and cried when my kids went back each September. (Although believe me, I got used to my "freedom" pretty quickly, too!)

So it goes...plus ça change, plus c'est la même chose. I am still the same, wishing that summer could last a month longer, that the pool water would stay close to 80F for a few more weeks, and that the vegetable garden would continue producing at its prodigious summer rate.


But then, after a few weeks of autumn, I always mellow into appreciating it for all its glories.
Autumn is a time of different bounties, just waiting to be discovered and appreciated.

The cooler weather and shorter days herald a season of foraging in the wild for foods that you can't get the rest of the year, such as divine, earthy mushrooms, and tangy, sweet Concord grapes, to name just two we have been getting this week. Foraging is one of the French joies de vivre that I adore, and one which most Americans don't often think of. There is much more available in the wild than most people think, and it's not difficult to find what used to be secret locations, since you can generally find what you're looking for (or even simply what to look for) on the internet.

I have posted before about Chez Panisse and other restaurants who are taking advantage of the "eat local and in season" mantra by incorporating foraged local foodstuffs into their menus. Nothing tastes better than freshly picked produce, and part of the joy is in picking it oneself, immersing oneself in the environment in which the food grows. Another great thing about foraging for food in the wild is that you are getting organic. Away from main roads and public ways, there is little chance of pesticides and herbicides reaching your quarry.

Jack and I began last week by picking Concord grapes on Monday, right down the road from our house. We got a huge haul, and I've already made jam, which I will write about in a separate post, including the recipe. 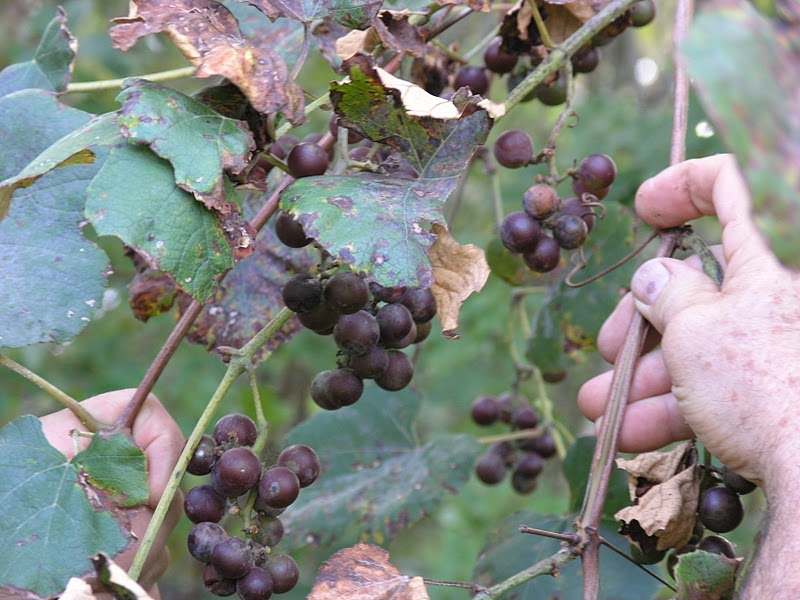 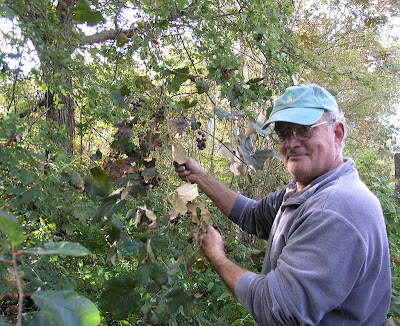 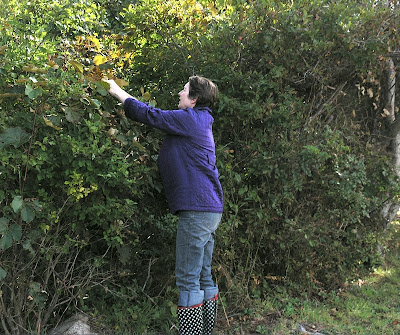 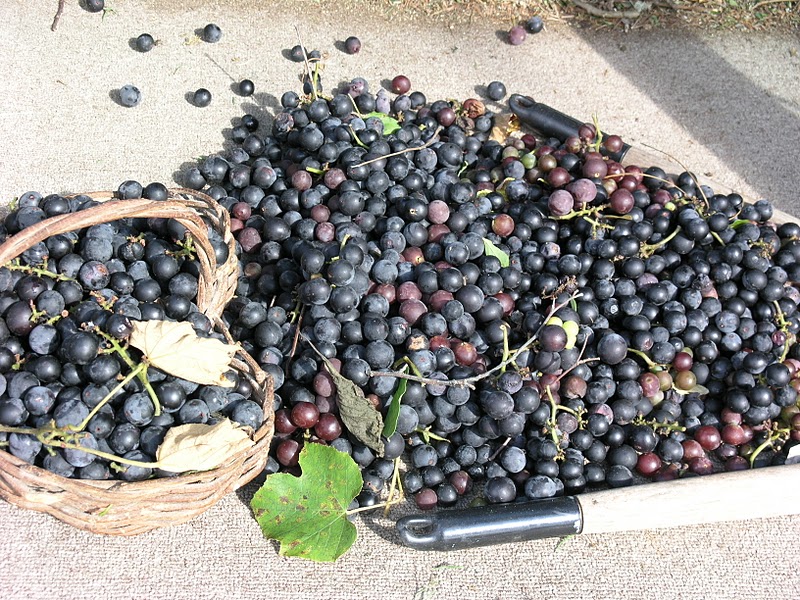 Then on Tuesday, we were heading up to Provincetown to visit some of the galleries there (playing hooky at our own gallery), when we passed an older man and woman walking along the roadside with full baskets. As we looked at them, we both turned to each other and exclaimed in unison, "MUSHROOMS!" Jack did an about face and another U-turn, so that we could come up alongside the couple, and offered them a ride, since they looked tired and it was beginning to drizzle.

As it turned out, they were the nicest couple, who had emigrated here from Russia a few years ago, and had gotten a love of foraging for mushrooms instilled in them as children in the USSR. They drive to the Cape every fall to get several varieties of mushrooms - as do numerous other emigres of Russian, Polish and other Eastern European roots. This couple was lost and tired and so grateful for a ride in our car. By the time we got to where their car was parked, and met up with their two friends (also Russian) we were on our way to becoming great buddies. We told them that we loved fresh mushrooms, and that we would like to find some of our own. This surprised them, as they generally think Americans are uninterested in such outings, but they kindly led us into the woods to search for mushrooms, and even gave us some of their own prize finds, to help us identify which ones are edible. By the time we said goodbye, we were all laughing and hugging, having exchanged email addresses. Hopefully we will see them again in Autumns to come!

Jack and I ended up going back to those and other woods a couple more times last week, and coming home with some real beauties, which we cooked and have had for dinner every night since. I will say, we did our research looking up pictures of edible mushrooms online, before actually cooking them. 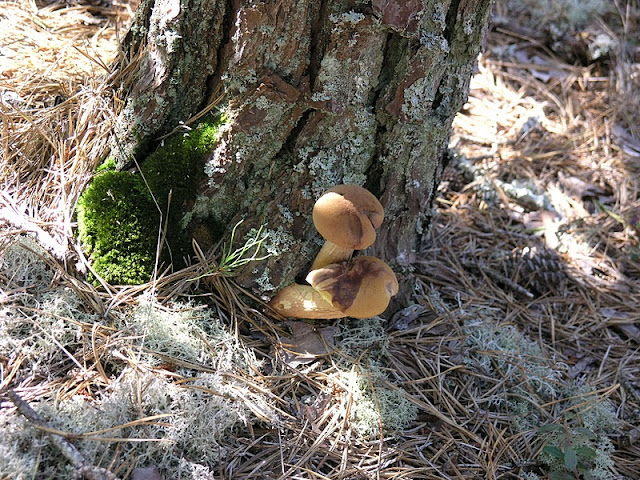 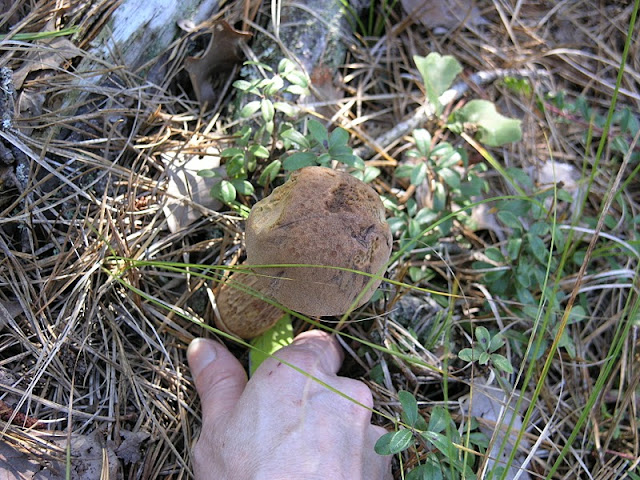 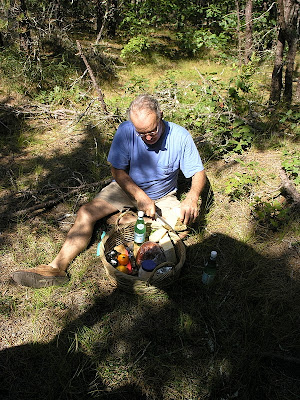 Autumn is also such a great season for picnics! 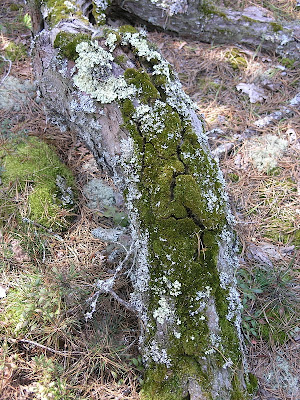 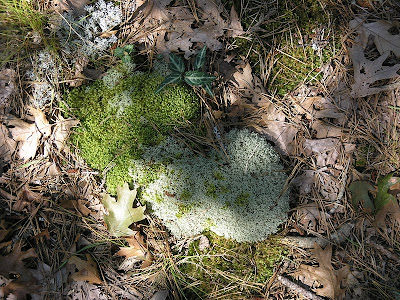 ...And I love the different colors of mosses and lichens that have grown over the summer: 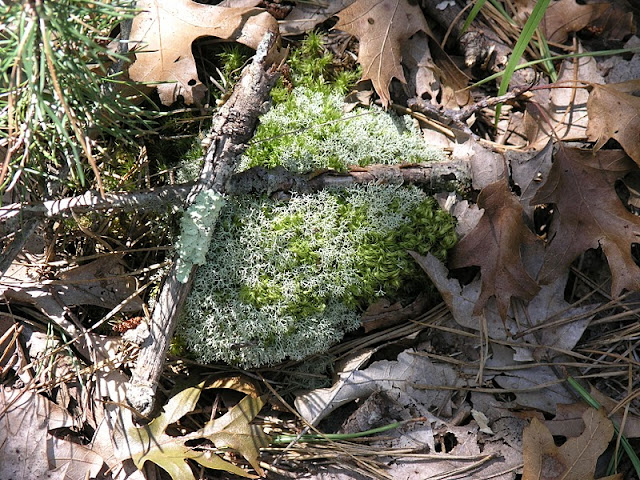 ...And the low-lying shadows of the fall months. 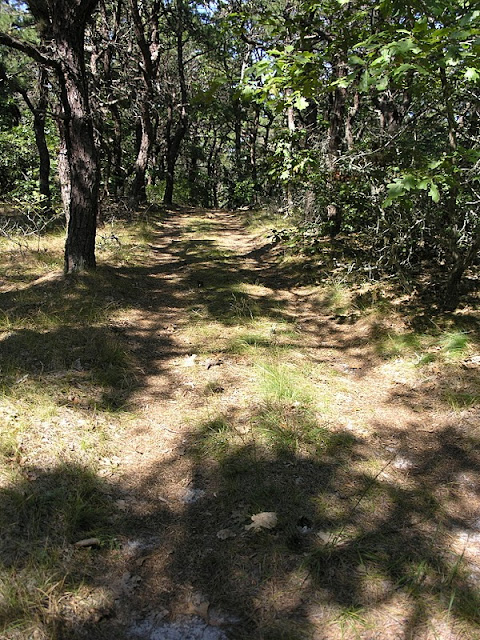 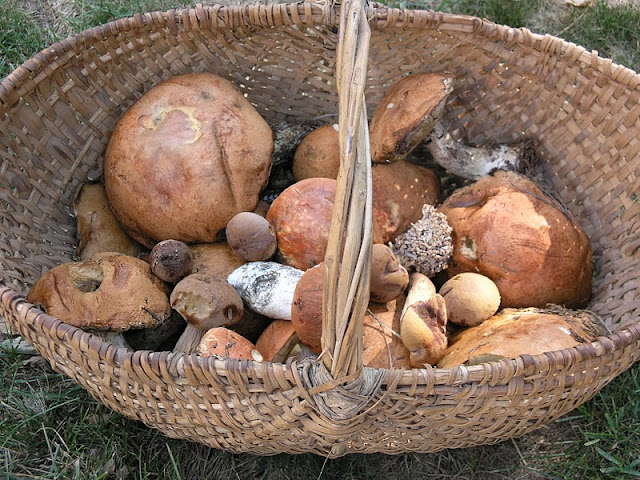 After the first day, we brought knives and baskets with us. 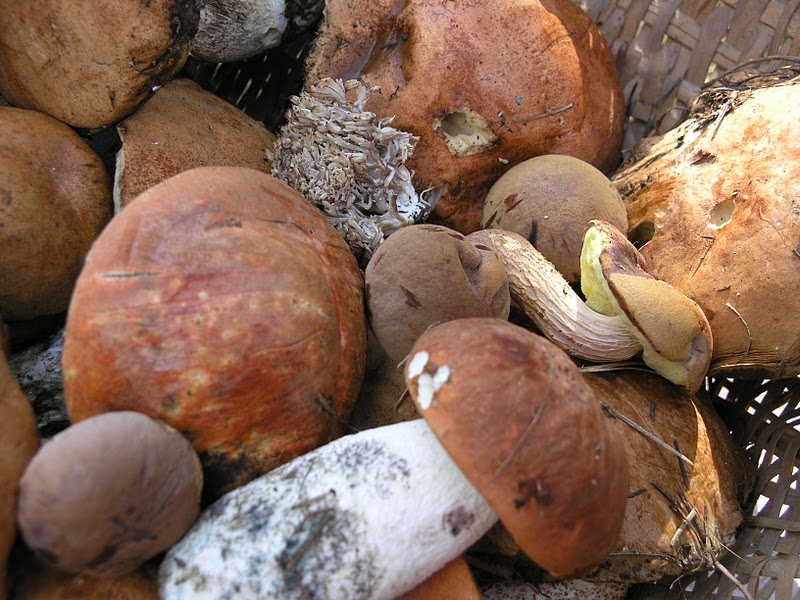 Some of our takings: we found four different kinds of edible mushrooms, including the absolutely delicious boletus edulis and its cousin, boletus bicolor.

The boletus is known in French as cepe and in Italian as porcini. Both names can be found in American grocery stores and some farmers markets. Here is an interesting story about the cepe de Bordeaux.

We were hoping that the grey coral-like thing in this photo would be edible, but could not find any pictures of it online, so we tossed it (in the trash - NOT the compost heap where it could have spread poison to all of our gardens!) I will do another post on preparing these wild mushrooms, including recipes.

I can think of few things more satisfying than picking our own foods in the wild, coming home and preparing them to be eaten and enjoyed within hours of the hunt. As we sit down to dinner, the memory of those glorious woodsy, musky odors from walking around in the cool, damp under forest are still as fresh as the feast we are about to enjoy!

WARNING - If you do get your own mushrooms, always check to make sure that the variety you pick is indeed edible.
Some mushrooms are not just poisonous, they are deadly!!
I found this great picture online: 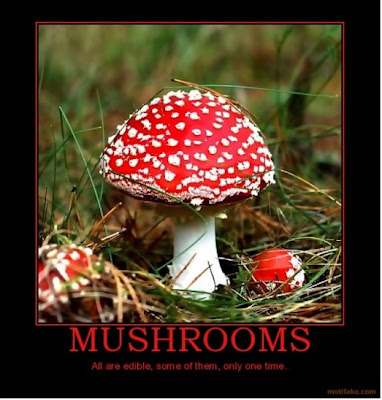 The caption says "All mushrooms are edible, some of them, only one time."

A good mushroom hunter's mantra: When in doubt, throw it out!

Posted by Kate Dickerson at 1:50 PM